In August 2009, I wrote about further travels of Tintin, cover art of additional places Tintin visited, by people who were not Hergé.

Australian artist Glenn Smith has drawn his tribute to Tintin set in Penrith, which is west of Sydney. 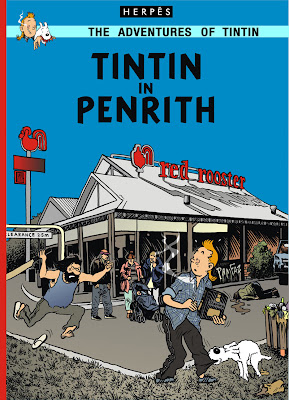 Glenn Smith hopes to offer the drawing as a poster.
Posted by Daniel at 17:30 No comments: Links to this post

Email ThisBlogThis!Share to TwitterShare to FacebookShare to Pinterest
Labels: tintin

The campaign slogan for France's Parti Socialiste, contesting the presidency with François Hollande as candidate, is "le changement, c'est maintenant".

Quite a dull campaign slogan but when combined with a hand and arm gesture, it's quite magnifique.

See reporting in Le Nouvel Observateur and France24.
Posted by Daniel at 13:00 No comments: Links to this post

Email ThisBlogThis!Share to TwitterShare to FacebookShare to Pinterest
Labels: politics

Whales give dolphins a lift

When two species share a common habitat, interspecific interactions can take many forms. Understanding the dynamics of these interactions can provide insight into the behavior and ecology of those species involved. Two separate, unusual interactions are described in which a humpback whale (Megaptera novaeangliae) lifted a bottlenose dolphin (Tursiops truncatus) completely out of the water. Both incidents occurred in Hawaiian waters. Based on reports of object play by hump-back whales, and the apparent initiation and cooperation of each dolphin being lifted, object (i.e., the dolphin) play by the whale and social play by the dolphin seem to be the most plausible explanations for the interaction. Aggressive and epimeletic behavior by the humpback were also considered.

Recently (10 January 2012), the American Museum of Natural History released photos of such an interaction

Was this a case of inter-species play or had one species 'domesticated' the other?

Posted by Daniel at 21:10 No comments: Links to this post