Back in September 2008, I wrote about paralympian Oscar Pistorius as an athlete to watch at the Beijing Paralympic Games. As it turned out, he won gold medals in the 100 metres, 200 metres and 400 metres (T44) sprints.

Pistorius has recently been chosen as the new face Thierry Mugler's fragrance for men A*Men. It is an inspiring choice. 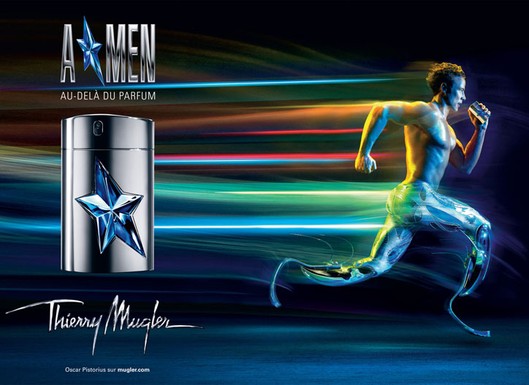 The 30-second commercial clip was directed by Ali Mahdavi


A behind the scenes look has also been produced


Pistorius the Blade Runner is indeed a star.
Posted by Daniel at 18:10 No comments: Links to this post

I've previously written about Vegemite and Marmite, that wonderful yeast spread that has been a mainstay of generations of children (and adults) in Australia and Britain.

In mid-2009, Kraft launched a milder version of Vegemite, blended with cheese (subsequently named Vegemite Cheesybite) in an attempt to lure new consumers.

Kraft has just launched 'myfirst Vegemite' without much fanfare aimed at younger children, of a watered-down version, to wean them slowly to full-strength Vegemite. Salt content has been reduced by 50 per cent in the new product with more iron and B vitamins. 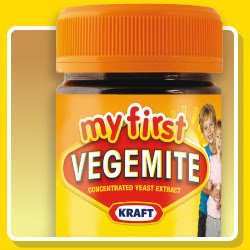 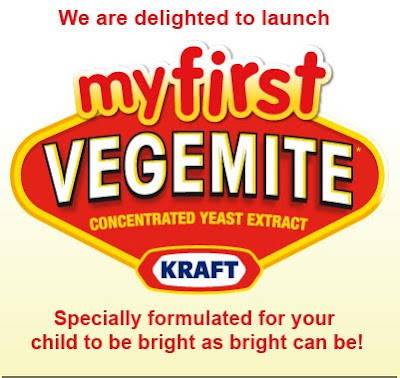 Traditional Vegemite sustained generations of Australian children with little adverse affect (everything in moderation), so another variation in product appears to be yet again another marketing exercise.

Vegemite is an acquired taste. Not all adults (as parents) eat it but they should really provide it as an option for their own children.

See reports in Sydney Morning Herald (two).
Posted by Daniel at 22:00 No comments: Links to this post

Email ThisBlogThis!Share to TwitterShare to FacebookShare to Pinterest
Labels: food

Sporthocker (Hockern in Germany) is a relatively new sport that originated in Germany in 2001 where a stool is used to perform tricks used in skating, juggling, acrobatics, dancing and even parkour. The completion of tricks is signified by sitting on the stool.

The sport really took off in late 2007 when a specially designed stool was created by brothers Michael and Stephan Landschütz from SALZIGdesign (priced from €100). Popular contests called Hocktoberfest have been held since 2007.


From Hocktoberfest 2010, a finals performance


Skateboards are so yesterday.

It's a pity that the only Australian media reporting of the sport was so disparaging.
Posted by Daniel at 22:15 No comments: Links to this post

Ewe are smarter than ewe think

The Public Library of Science's international, peer-reviewed, open-access, online publication PLoS ONE has reported that sheep are actually far more intelligent than their reputation holds. Abstract

Two new large animal models of Huntington's disease (HD) have been developed recently, an old world monkey (macaque) and a sheep. Macaques, with their large brains and complex repertoire of behaviors are the ‘gold-standard’ laboratory animals for testing cognitive function, but there are many practical and ethical issues that must be resolved before HD macaques can be used for pre-clinical research. By contrast, despite their comparable brain size, sheep do not enjoy a reputation for intelligence, and are not used for pre-clinical cognitive testing. Given that cognitive decline is a major therapeutic target in HD, the feasibility of testing cognitive function in sheep must be explored if they are to be considered seriously as models of HD. Here we tested the ability of sheep to perform tests of executive function (discrimination learning, reversal learning and attentional set-shifting). Significantly, we found that not only could sheep perform discrimination learning and reversals, but they could also perform the intradimensional (ID) and extradimensional (ED) set-shifting tasks that are sensitive tests of cognitive dysfunction in humans. Their performance on the ID/ED shifts mirrored that seen in humans and macaques, with significantly more errors to reach criterion in the ED than the ID shift. Thus, sheep can perform ‘executive’ cognitive tasks that are an important part of the primate behavioral repertoire, but which have never been shown previously to exist in any other large animal. Sheep have great potential, not only for use as a large animal model of HD, but also for studying cognitive function and the evolution of complex behaviours in normal animals.

So due to ethical issues with testing on macaques, it was acceptable to test on sheep and the studies inadvertently revealed that sheep have a higher brain function than first thought.

Perhaps it would worth undertaking comparative studies with pigs and dogs. Despite claims of pigs being more intelligent than dogs, they are still bred for food. Raising the status of sheep is unlikely to save their chops.

See also New Scientist.
Posted by Daniel at 22:00 No comments: Links to this post

James Creedon from France24 also reviews the international (non-French) media. The one for 8 February 2011 is quite entertaining.

Our linguistically talented James is back to wearing glasses.
Posted by Daniel at 22:15 No comments: Links to this post

Egypt and Tunisia: Being caught unaware

The most startling revelation about the unrest in Egypt and the Tunisian revolution were the admissions by the governments of the United States and France that they were caught unaware. Understandably, resources tend to be prioritised based on strategic importance. A country like Tunisia, comprising a comparatively small population of 10.5 million, with a stable though dictatorial government and secular society with a proven record of controlling what it considered an Islamist threat would appear to be of lower importance.

The US State Department were certainly aware of the events unfolding in Tunisia, but may have underestimated how it would turn out, such as President Ben Ali's sudden and unexpected flee out of the country. Perhaps embassy staff, whose main interlocutors tend to be host government officials, were too comfortable with a long-term understanding of the intentions of the Ben Ali government, instead of listening to public mood. They would have found the blog by The Guardian's Brian Whittaker interesting reading. His columns in The Guardian are also worth a read.

More surprising is France's admission, given there was so much reporting and analysis by the French media including access to much content on Twitter by participants (labelled with hashtag #sidibouzid) written in French. Literacy levels are high in Tunisia and many speak French in addition to, and often in preference, to Arabic.

Even during the events of Tunisia, there were already low-scale levels of unrest in a number of countries in north Africa (Maghreb) and the Middle East over similar concerns. It should not have been a surprise that Egypt would be next in terms of the scale of protest activity. Egypt already had a 'martyr' to the cause since 13 June 2010, which has provided a focus for mobilisation, particularly through the internet. The protest planned for 25 January 2011 was known in advance but it was the strength of the larger protest on Friday a few days later that seemed to take many by surprise.

Analysis by some tried to compare Egypt with Tunisia. The BBC even went so far as deeming the "contagion spreading to Egypt" unlikely due to lower literacy and lower internet penetration. Of course, early analysis of what took place in Tunisia over-emphasised the role of the internet and social media, in particular Twitter and facebook. Out of a total population of about 80 million, 17 million internet users might be be considered low penetration. However, this analysis did not consider the possibility that many of the internet users themselves may reside in greater Cairo with an estimated population of nearly 10 million people. It only takes a few million well connected people, along with word of mouth to mobilise.

Amidst skepticism and misreading of the situation, Professor Amin Saikal, Director of the Centre for Arab and Islamic studies at the Australian National University, had suggested Egypt as being the next most vulnerable following Tunisia as early as 17 January 2011 while I had picked it a day earlier.

Lastly, public mood was largely misread. Egyptians, like others around the world except those in China and other countries practicing censorship, had also witnessed what happened in Tunisia. It became a driving force for political action.

This post was also published in Crikey on 7 February 2011.
Posted by Daniel at 19:15 No comments: Links to this post

It's Dalek Week at the BBC.

Viewers voted for their favourite Dalek scenes. This one is from Victory of the Daleks


How Daleks came to exist was explained in the 1975 episodes of Genesis of the Daleks. This is a clip of Sarah Jane Smith seeing Davros, the Dalek's creator, for the first time.


See more - BBC Doctor Who Celebrating the Daleks
Posted by Daniel at 08:00 No comments: Links to this post

Email ThisBlogThis!Share to TwitterShare to FacebookShare to Pinterest
Labels: Doctor Who

A law against flatulence

The Malawi Democrat has reported that the Parliament of Malawi will table a bill to criminalize farting. However, Solicitor General Anthony Kamanga earlier claimed there was no such law intended. As reported


“The Local Court Bill confers jurisdiction on local courts, inter alia, to try offences under Section 198 of the Penal Code which reads: Fouling Air: Any person who vitiates the atmosphere in any place so as to make it noxious to the public to the health of persons in general dwelling or carrying on business in the neighbourhood or passing along a public way shall be guilty of a misdemeanor,” Kamanga, who is also Principal Secretary in the Ministry of Justice and Constitutional Affairs, said.

“How any reasonable or sensible person can construe the provision to criminalising farting in public is beyond me, and to claim, as some people have, that the bill is (an) introduction (of) an offence on farting is not true,” he said.

The Malawi Democrat cites Justice Minister George Chaponda's interview on Capital Radio where he indicated that an anti-farting provision would ensure decency.

Something stinks in all this.
Posted by Daniel at 21:30 No comments: Links to this post

Email ThisBlogThis!Share to TwitterShare to FacebookShare to Pinterest
Labels: bizarre

I haven't written in this blog lately, instead spending a lot of time monitoring global media and Twitter to check out developments in Egypt. I have also been tweeting a lot on the topic.

Staying with the France24 theme, they have a brilliant review of the French and international media, presented by James Creedon.

Posted by Daniel at 21:30 No comments: Links to this post